Image forensics in the “real world”

On 23rd January 2014 has appeared on various websites of international and Italian newspapers the news that the Associated Press (AP) had fired the photojournalist Narciso Contreras (Pulitzer Prize 2013) because one of his photos provided to the agency was counterfeited (see Figure 1). According to the reporter, such a manipulation was carried out, in order to remove a video camera, belonging to a colleague, which was visible in the bottom left corner of the original photo. By using our CMFD (Copy-Move Forgery Detector), and without resorting to the original image, we were able to discover the manipulation carried out by the photojournalist (copy-pasted regions to cover the camera). 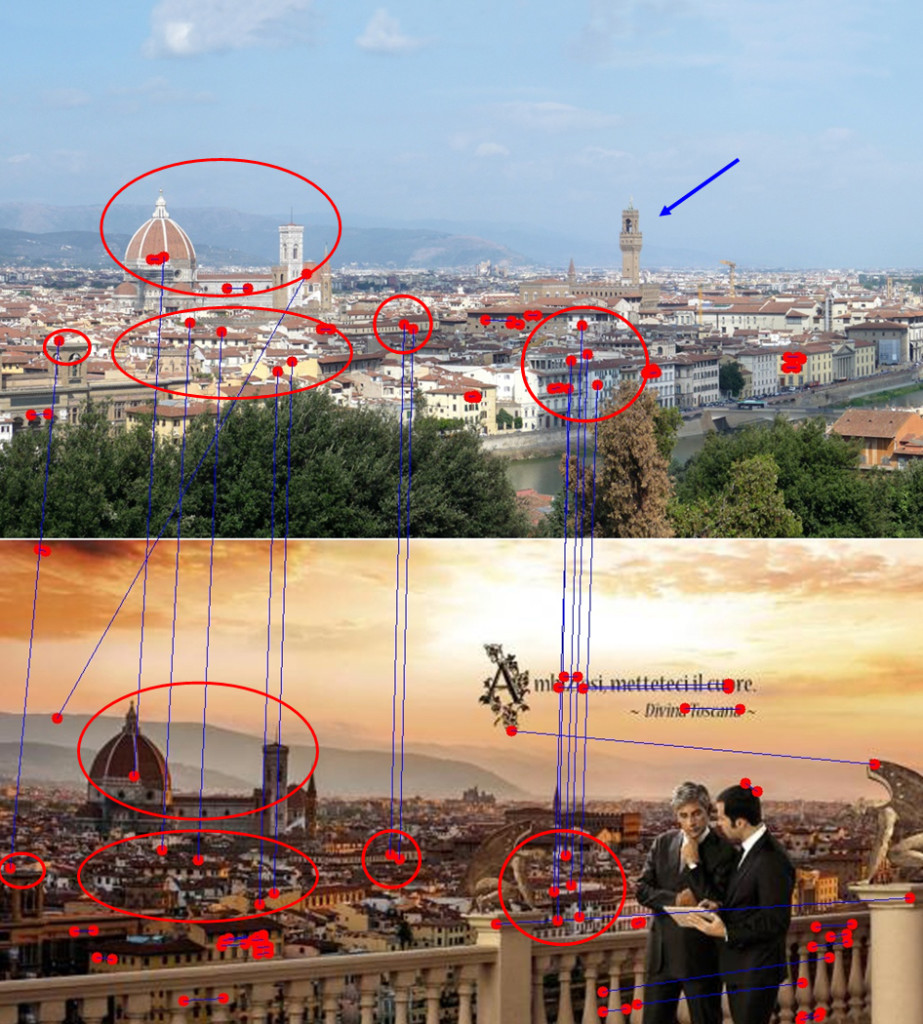 On 8th February 2014 has appeared on various Italian newspapers the new advertising campaign “Divina Toscana” to promote tourism in the Tuscany Region. This campaign has risen a lot of discussion due to excessive use of photo editing. The eight images chosen for the campaign in fact, show landscapes in which has been added fake details. Cristina Scaletti, Tourism Assessor, in agreement with the Governor Enrico Rossi has decided to suspend the campaign and it has not been presented at the BIT (Borsa Internaz. del Turismo) in Milan (Feb. 13-15, 2014).
In particular we analyzed one of the eight images of the advertising campaign representing the Florence panorama. From this analysis it has come out that the image first of all was flipped and then the Tower of Palazzo Vecchio (Torre d’Arnolfo) has been removed within the picture of the advertising campaign.

On 26th of February 2014 a picture showing thousands of refugees queueing for aid has emerged exposing the shocking conditions inside a devastated Palestinian camp in Syria. The scene from inside Yarmouk camp, which is situated south of the capital Damascus, were described as “apocalyptic” by the United Nation’s Relief and Works Agency (UNRWA). Some skeptics have suggested that it was digitally faked because it seems unreal. By analyzing the image with our forensic tools, it does not represent traces of forgeries. This fact is confirmed by a video sequence retrieved analyzing the tweet on this topic . From the video it can be appreciated that the situation was real.

WATCH “@Brown_Moses: Here’s the video of the incredible scene at Yarmouk taken by the UN http://t.co/XDNysAGE28 pic.twitter.com/5jU5ACVrDh”