Our group is involved in two aspects regarding the task of acquisition device identification: the first is to determine which specific camera or scanner (by recognizing model and brand) acquired that certain content, while the second is to understand which kind of device generated a digital image (e.g. a scanner, a digital camera or is a computer graphics product). 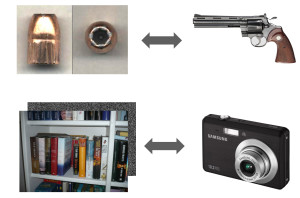 The Photo Response Non-Uniformity (PRNU) is used as sensor fingerprint and it is commonly employed to solve the problem of digital camera sensor identification.
The PRNU noise is induced by intrinsic inhomogeneities over the silicon wafer and imperfections generated during sensor manufacturing process of CCD/CMOSs.
The extraction of PRNU noise happens through a digital filtering operation from a set of digital images taken by a camera. After that, the PRNU noise of the to-be-checked image is extracted and compared with the available fingerprints and then the image is classified as taken (or not) by a certain camera.
Different denoising filters based on diverse noise models have been studied and implemented to perform digital camera tracking . In particular, a digital filter, based on a signal-dependent noise model, has been introduced and compared with others commonly adopted for this purpose. 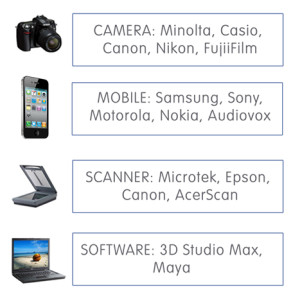 Succeeding in determining information about the origin of a digital image is a basic issue of multimedia forensics. It is easy to understand that in many application scenarios information at disposal are very limited; this is the case when, given a set of N images, we want to establish if they belong to different cameras, without having any knowledge about the source cameras.

We developed a new technique which aims at blindly clustering a given set of N digital images.
The system is able, in an unsupervised and fast manner, to group photos without any initial information about their membership. Sensor pattern noise is extracted by each image as reference and the successive classification is performed by means of a different kinds clustering procedure.

Furthermore it could be worthy to individuate which is the kind of source (digital camera,
scanner or computer-generated) that has generated a certain photo. Such an issue has already been studied in literature, but the problem of doing that in a blind manner has not been faced so far. We have been proposing an unsupervised and fast manner, to blindly classify a group of photos without neither any initial information about their membership (different classes of acquisition sources) nor by resorting at a trained classifier.

Distinguishing between camera and scanned images:

We have developed a detector which permits to determine if a digital photo has been taken by a camera or has been scanned by a scanner. Such a technique exploits the specific geometrical features of the sensor pattern noise introduced by the sensor in both cases and by resorting to a frequency analysis can infer if a periodicity is present and consequently which is the origin of the digital content.